Ashley’s experiences in childhood led her to a career in human services. Growing up, her dad worked in disability services and took care of people who were quadriplegic. Additionally, her experience as being part of a large family with many siblings helped her develop patience with others. In 2004 when she left her job in retail, she decided to work at a group home. 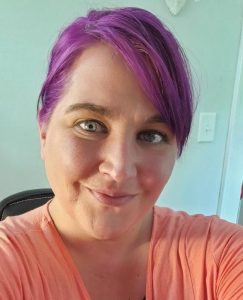 Eventually in 2019, she decided she needed a change and found an opportunity at Placement Partners. She previously worked in roles where supervision was a piece of the job, but never where it was central to the job. She was hesitant about the transition at first but found her stride in supervising others by role modeling how Kira Yastrebova, our Residential Program Director, runs the department.

Ashley’s style of supervision is supportive but not overbearing. She sets up clear expectations for her staff, but Ashley understands that working with people can lead to complicated situations that require special considerations. She gives her staff flexibility when things come up for them and encourages open communication when difficulties come up. Ultimately, the most important thing for Ashley is the impact on the clients.

Ashley’s approach to client work can be summed up in one word – accountability. She believes, “Your word is all you have.” She went on to explain that this field can have frequent turnover, and clients have often had promises broken by those who work for them. Therefore, it is simple for Ashley, if you promise a client you are going to be there at a certain time, be there. Ashley believes that it is essential to make sure everyone is treated the way they want to be treated and to be authentic in your relationship with them.

Ashley has endeared herself to clients and case managers alike for her ability to establish trust in relationships and to get things done. She credits her success due to her ability to multitask and realization that she should always strive for improvement. Ashley points to her success as a supervisor and being able to grow comfortable in her role as what she is most proud of in her work at Placement Partners.

Due to this outstanding work, she has been given accolades from case managers and clients. One case manager wrote that her client was so impressed with how Ashley has always been there for him, that he had prepared a thank you card to give to her. The case manager went on to say Ashley is responsive in communication with her as well and that she is thrilled with her work. Most importantly she says that Ashley “plays a vital role in the lives of the people we serve and the energy she brings to their lives is never ending and it is rare”.

The work environment and the closeness of her team helps Ashley stay excited and energized in her role. She does not worry about burn out because she has such a positive support system amongst her fellow Associate Program Directors and Kira. She is proud to be employed by a company that is capable of such a supportive atmosphere. We are proud to have Ashley as an employee as well and hope to continue the encouraging environment that has allowed her to thrive in her role!